We Are Fortunate To Work with Heroes 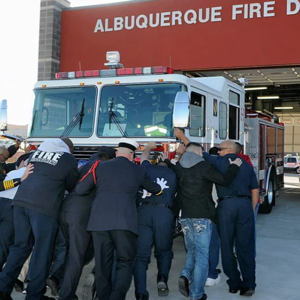 Some people stand by and watch an emergency event that calls out for help, but never take action nor tell anyone. Other folks jump in to help, then tell the world of their great deeds. Perhaps the smallest category is people who jump in to help, but say only, “Yesterday was an interesting day.”

This story is about that last, rare category of people.

It was the end of the workday at San Martin de Porres Church in Southwest Albuquerque, when all the workmen were gathering up their tools, ready to head home. One of those workmen was our Vice President, Bobby Jaramillo, who had just completed his site inspection.

As Bobby stepped into his truck, he noticed smoke pouring out of the garage of a home across the street. He yelled to one of the workers to call 911, and ran to the home. Bobby pounded on the front door and called out to anyone inside, but no one answered or came to the door. Bobby concluded no one was home, and for his own safety, started to walk away.

Just as Bobby cleared the garage, there was an explosion inside it. The “kaboom” was enough to stir the resident inside the home. Bobby turned and saw a mother holding her infant while standing at the front door. Smoke swirled behind her. Bobby ran up to her to help her get away. But she was confused, unwilling to leave her front door.

Bobby took the infant and tried to persuade the mother to leave the front door. She would not leave. He then realized another child was in the home. Two other workers, Sylvester Gallegos and Jacob Jaramillo, came to help, took the baby from Bobby, and ran to the opposite side of the street.

Another worker, Jacob Aguilar from Anderson Air Corporation, ran into the home to rescue the second child. Moments later, Jacob emerged with the child and ran to a safe difference away from the home. However, the mother still would not move from her front door because there was a pet dog in the house. Jarred Lavato from Anderson Air called for the dog, and it came to the front door. Finally, the mother left the front door with Bobby to stand at the street near her home.

The fire department arrived and assessed the situation. Who was the father? One man held an infant, another held a child, and a third man was comforting the mother.

None of them was the husband and father – they were just our guys. They handed back their wards to the mother, loaded up their trucks, and headed home.

The next day: “Oh, yesterday was an interesting day.”

Was I surprised? No.

I have known Bobby for more than 25 years. I remember many years ago, he came into my office and said, “Oh, yesterday was a tough day.”

He related the story. There had been a car accident on his way home. Of course, Bobby stopped to help. It was clear that the young occupants of the car had just moments left to live. He climbed into the car and held the young woman’s hand, so she knew she was not alone. Bystanders stood outside peering in. He yelled to one of the bystanders to hold the young man. The end came quickly for both of them. Bobby climbed out of the car and headed home.

“Last night I told my family, ‘Wear your seat belts. I love you.’“

Now you know why I feel grateful to have known Bobby Jaramillo for a quarter century.